The sociologist Rodolphe Christin, who has devoted several books to tourism, is very critical of an industry obeying, according to him, only the consumerist model.

Rodolphe Christin is notably the author of the “Manual of Antitourism” (Ecosociété, 2018), of “L’Usure du monde, critique de la unreason tourism” (L’Echappée, 2014) and, recently, of “The real life is here. Traveling again? ” (Ecosociété, 2020) It takes stock of the terrible crisis currently affecting this sector.

The tourism sector is totally shaken by this crisis. Do you think it will come out different?

It is clear that awareness seems to be emerging among some decision-makers in the tourism sector. But what risks obliging tour operators to change their practices is an unfortunate reason: the crisis in demand. The economic crisis will probably create an impoverishment of the population which will have an impact on the ability of people to afford tourist trips. This risks forcing the sector to review its practices. However, if the opportunities for making a profit again exist, the tourism industry will seize the opportunities that come their way. The sector will be transformed only by the effect of the economic crisis, forced and forced, which is not exactly good news.

Should it be taken over by the politician?

There has always been a strong consensus between the political power and the tourism sector. They have always moved forward hand in hand: on the political side, organizing the territories and developing an attractive tourist offer; in the tourist sector, transporting tourists and setting up commercial operations to sell tourist stays to as many people as possible. To develop tourism, we must not forget that we must develop the territories. It is public policies that have fostered this capacity for development. I do not think that the political power will take back control. What can give decision-makers pause for thought are the protest movements that appear here and there against tourist development projects. On this level there are active minorities. More generally, there is a certain disaffection of public opinion for tourism. The problem is that this criticism of tourism always seems ambiguous: the tourist, in principle, is always the other. Whoever criticizes the excesses of tourism always considers that he, when he leaves, is doing good tourism.

Should the political world, for example, come to the aid of the aviation sector under certain conditions?

This could be a means of pressure to constrain this sector and favor other modes of transport, less harmful to the environment. But I doubt that is enough. At country level, these are potentially good measures, but equivalent decisions should be taken at the extra-national level. I am not convinced that our political leaders have the will.

More local tourism, as it is developing during this summer because of the Covid-19 crisis, does it represent the future?

This is what is happening, but it is not a revolution. Most tourists do domestic tourism and stay in their country. The majority of tourists do not cross borders. This figure will be higher following the crisis. But this is more of a problem than a solution: if the mass effect, which hitherto spread internationally, is now distributed nationally, it could cause a lot of damage. on host societies and nature. This therefore in no way preserves the excesses of tourism. On the other hand, the airline sector is strongly affected. As a result, airlines are promoting their domestic flights by competing with the train, which is not good news for the environment. The crisis in tourism is terrible, in terms of bankruptcies and job losses. We can understand that there is therefore a survival reflex. But in the longer term, we cannot do without serious reflection on the future of tourism.

Is tourism more and more unequal?

80% of executives and 50% of non-executives go on vacation. The executives go abroad more, while the others rather stay in their country. Tourism is very unequal. Those who emit the most greenhouse gases are not the working classes, it is the well-to-do classes who can afford to take the plane to go abroad for a weekend, for example. It is not the popular classes that pollute the most. They are therefore not the ones who should take on all the criticisms formulated with regard to tourism.

“80% of executives and 50% of non-executives go on vacation. Executives go abroad more, while the others stay in their own country.”

What does tourism say about us? What is it the symptom of?

Historically and sociologically, tourism as we know it has developed with the wage society and paid holidays, which have made it possible to give the worker free time and the means to travel. The tourist is the Siamese brother of the worker. Over time, tourism has become an act of consumption like any other, part of the economic continuum. Tourism is the pure product of capitalism, it is part of the logic of production and consumption like any industry.

“Tourism is the pure product of capitalism, it is part of the logic of production and consumption like any industry.”

Tourism killed travel, do you think?

I consider that the thought experience related to moving and confronting another, a different culture, deserves to be saved. It’s the very heart of the travel experience. But the distinction between travel as a vector of knowledge and tourism as a vector of entertainment is very thin in practice today. Tourism could have been an interesting popular education tool, by bringing people together with other cultures, with what is happening elsewhere. But today this tourism which we called “social” has been undermined by a tourism of consumption and entertainment. Tourism is no longer about making us better people.

“I consider that the thought experience of moving around and confronting one another, a different culture, deserves to be saved.”

Should we build a kind of tourist ethics?

The guilt of the individual does not seem to me to be the right way. When you turn on your computer, the first image you see is an image of distant land. The incentive for tourism is permanent. Tourism has become a conformist act. It is a way of life that must be questioned and a certain political organization that builds social relations solely on the basis of production and consumption. Ethical tourism comes as a response to a form of guilt that develops among people. How to spend so much money in countries where people barely have enough to eat? Ethical tourism alleviates this anxiety, even if it is never just another commercial segment within the tourism sector.

“Ethical tourism comes in response to a form of guilt that is developing among people. How can we spend so much money in countries where people barely have enough to eat?”

What about eco-tourism? Doesn’t it embody a form of alternative to consumer tourism that you describe?

The exploitation of nature as a resource is accompanied by this idea of ​​nature as a sanctuary to be contemplated. Very few people have a daily relationship with nature. We have essentially industrial and urban lifestyles. Nature has therefore become an exotic object, which the eco-tourist will contemplate for a few hours a year. This does not represent a mode of exchange with the environment, but at best an aestheticization. This phenomenon is the symptom of a complete separation from the natural environment. Urban life induces lacks but, paradoxically, the lack of nature which drives crowds by plane or via the highways into specially developed natural spaces is problematic, if not absurd.

Limiting tourism means taking the risk of economically strangling certain regions or cities. How to review this economic dependence on tourism?

We must avoid adopting a purely sectoral reasoning. The question of tourism involves completely rethinking our way of life. We must also rethink all production, in particular by relocating, and by asking ourselves: what is an essential need? We have to think in a much broader way. Dependence on tourism is widely criticized, including by the people who make a living from it. We do not necessarily live well in an economy entirely formatted by tourism. In reality, in this type of configuration, tourism only supports part of the population. We forget to say that it generates precarious jobs and that it makes life impossible; for example it is sometimes very difficult to find accommodation in this context, because the owners prefer to rent more expensive to tourists. These are not necessarily places where life is good. On the other hand, these are very fragile economies. Before the crisis, the UNWTO (World Tourism Organization) estimated that the tourism sector was growing by 5.5% annually. The coronavirus crisis brought this whole system to a standstill. Lessons should be learned for the future.

“Tourism dependence is widely criticized, including by the people who make a living from it. You don’t necessarily live well in an economy entirely formatted by tourism.”

Tue Aug 11 , 2020
First affected by the coronavirus crisis, the tourism sector is going through difficult times. What if this unprecedented period was an opportunity to rethink unreasonable tourist activity and practices that are not always very respectful of the planet and its inhabitants? Let us remember this startling example: last February, a […] 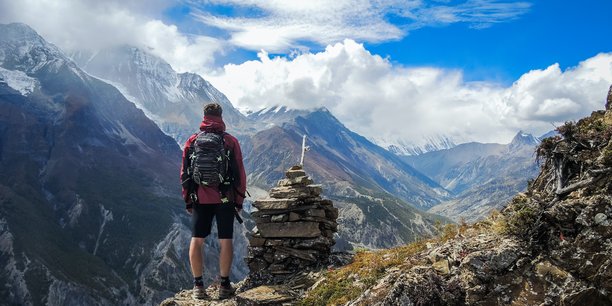