The Thai resort town of Prachuap Khiri Khan, usually popular with locals, refueled over the weekend of July 25-28, while other better-known international sites continue to suffer from the absence of foreign tourists.

Located 280 kilometers south of Bangkok and 80 kilometers from the royal resort town of Hua Hin, the town of Prachuap Khiri Khan has attracted many visitors from all over Thailand, mainly from Bangkok or the neighboring provinces of Phetchaburi. , Chumphon or Surat Thani. An obligatory passage between the center and the south of the country, this fishing port is a peaceful seaside town which has always been relatively unknown to foreign tourists, but very popular with Bangkok residents during their holidays.

Many hotels had occupancy rates of over 80% or even full during the long weekend of July 25-28. Beachfront restaurants were also packed every night, and it sometimes took patience to find an available table. The Saturday night market also saw crowds flocking to the food, clothing and souvenir stalls, until the rain cooled the visitors’ enthusiasm and lowered the morale of the vendors.

“It’s really bad luck,” groans Lek, a French-speaking Thai woman who sells jewelry that she makes herself. “Seeing the world come in, I was looking forward and thought I was having a good night, because there was no ‘Walking Street’ until July 1,” she said. “But hey, since the reopening [de la walking street], business is still picking up rather well ”, she reassures herself.

Since the end of interprovincial travel restrictions, the town of Prachuap Khiri Khan has welcomed many visitors every weekend with for hoteliers significant contrasts between weekend and week occupancy rates. “We closed on March 18 because we had no more clients,” explains Jatuporn Lailon, owner of the Yuttichai guesthouse. “Then the government ordered the hotels to close. We reopened on June 17, but we had to wait until the long weekend of July 4 to welcome the first customers. Since then, every weekend, we have people ”, she rejoices.

Far from being in a strict “new normal”, the city gives the impression of a return to the life of before. While more people are seen wearing the mask in the night market, many leave it out or just slip it under their chin. At the beach, however, it is non-existent. The only times when not having one seems prohibitive is to enter mini markets and stores with air conditioning or when having the temperature checked when you want to enter the Wing 5 military base to get to the Ao Manao beach.

Closed since the end of March, the military base has only reopened to the public since July 1 with a control and a limitation of the number of visitors to 500 simultaneous vehicles per day. For many residents, the reopening of Ao Manao beach is really boosting tourism. It must be said that this is the only beach where it is possible to rent deckchairs and where the calm and shallow water of the bay offers a safe environment for children to swim.

Playing with its panorama to attract visitors, the military base allows, during long weekends, to climb Khao Lom Muak hill. After an ascent of 615 steps and climbing on winding paths, the summit rises to 280 meters and offers one of the most beautiful views of the three bays (Ao Noi, Ao Prachuap and Ao Manao) which constitute the geographical specificity from the city.

However, since always, the city of Prachuap Khiri Khan does not rely only on tourism and even less on foreign tourism, often preferring to direct them towards Hua Hin. The capital of the province, the city hosts all the administrative offices, a military base, schools, a meteorological research center, a science park, etc.

For Thanyamai Saisakon, a masseuse, the most difficult thing was the obligation to close her salon. “I couldn’t work for three months, I got help from the government, but it wasn’t enough. On the other hand, since mid-June, business has been resuming as before, ”she explains. Other restaurateurs and traders confirm Thanyamai’s words.

With a long weekend and a financial aid campaign “We travel together”To encourage Thais to travel, many of them have taken the road, often with their families, for a few days to destinations that are not necessarily popular with foreign tourists.

The Thailand Tourist Board (TAT) expects the July 25-28 weekend to generate baht 6.8 billion in revenue, slightly less than the July 4-7 long weekend. which had raised revenues of 8.58 million baht. The TAT reports that many hotels have occupancy rates of 80-90% in coastal towns in the eastern and southern Gulf of Thailand.

Among the popular destinations, the east coast with Jomtien, Koh Samet and Koh Chang as well as several cities in the south such as Hua Hin, Prachuap Khiri Khan, Ban Krut or Khanom.

Maxime Gaillard, director of the Baan Thong Ching Resort in Khanom in the province of Nakhon Si Thammarat told Lepetitjournal.com/bangkok to be quite optimistic. “I am on the list of participating hotels in“ We Travel Together ”and since then I have been bombarded with reservations from Thais. In fact, in Khanom, most of the hotels are full on weekends and there, with the long weekend, I am full for 4 nights in a row, a first! ”He says. “We are not only dependent on Europeans, we are more in a Thai market. We must never forget that even if it is tempting to go and canvass European customers, we can see that when there are hard knocks, things go straight ”, adds Maxime Gaillard.

In Jomtien, there are almost more people than during the usual Songkran festivities, the Buddhist New Year as witnessed by Patrick Dussuchal. “At Flow Café, my wife’s coffee shop, we usually have foreign customers, but this weekend is crazy, we made 2 or 3 times more numbers than usual! In Pattaya, it remains deserted, half of the businesses are still closed and it must be said that the city suffers from a bad reputation among Thai tourists. On the other hand, in Jomtien, it’s crowded, it’s good to see a few people during a weekend ”, comments the Frenchman.

For others, the agony continues

Koh Samui did not take advantage of the wave of Thai tourists during the 4-day weekend, deplores Alexandre Caporali, the honorary consul of France in Surat Thani. “Compared to the desert that Koh Samui has become, there were a few people during the long weekend, but it remains insignificant. The island is entirely dependent on foreign tourism and currently 80% of businesses are closed! ”, Explains Alexandre.

The island of Koh Phangan has benefited slightly from Thai tourists from Bangkok or Phuket. “There have been a few Thai tourists, but I would say it didn’t really have an effect,” comments Quentin Seynaeve, a Belgian owner of a hotel and two restaurants on the nearby island of Koh Phangan. “In Koh Phangan, they are mainly European tourists and in view of the situation in Europe, we know that until December it is dead and with the end of the visa amnesty on September 26, it will still be worse, ”he adds.

On social media, some hotel managers congratulated themselves on filling up with visitors while others in Phuket, especially Patong Beach, almost accused them of spreading false rumors when their hotels have remained empty for months. .

Indeed, some cities such as Phuket, central Pattaya or Koh Samui, which for many years have turned to international tourism are struggling to bounce back and attract domestic tourism. Destinations that also suffer from a sulphurous reputation among Thais, as Alexandre Caporali, Quentin Seynaeve and Patrick Dussuchal agree when talking about their respective places of residence which are Koh Samui, Koh Phangan and Pattaya.

With the borders closed to foreign tourists and the uncertainty over the reopening date, Thailand’s tourism sector, which welcomed nearly 40 million visitors in 2019, has no other choice for now but to look to the domestic market to survive. In this, the destinations which were positioned on this market naturally have the best advantages to make the most of it quickly.

At the end of April, the Thailand Tourism Authority (TAT) still hoped to attract 16 million foreign tourists to Thailand for the year 2020. Three months later, in July, the Bank of Thailand (BOT) estimates that the kingdom will welcome only 8 million foreign travelers this year, a drop of 80% compared to 2019, with revenues from this foreign windfall representing 11.4% of GDP.

Thailand has already registered 6.69 million foreign visitors between January and May, a drop of 60% compared to the previous year, the Ministry of Tourism announced at the end of June. Suffice to say that the forecasts for the rest of the year are not very optimistic and several players in the tourism industry fear that the borders will remain closed until the end of the year whereas a few months ago, they hoped to be able to welcome tourists again for the start of the peak tourist season in October.

LIVE | The latest developments on the coronavirus

Tue Aug 11 , 2020
Whether in Quebec or elsewhere on the planet, the COVID-19 pandemic has been disrupting our lives for several months. Here you will find all the news throughout the day related to this crisis affecting the population, governments and the economy. LAST REVIEW 5:20 p.m. PLANETARY Case: 19 952 057 Dead: […] 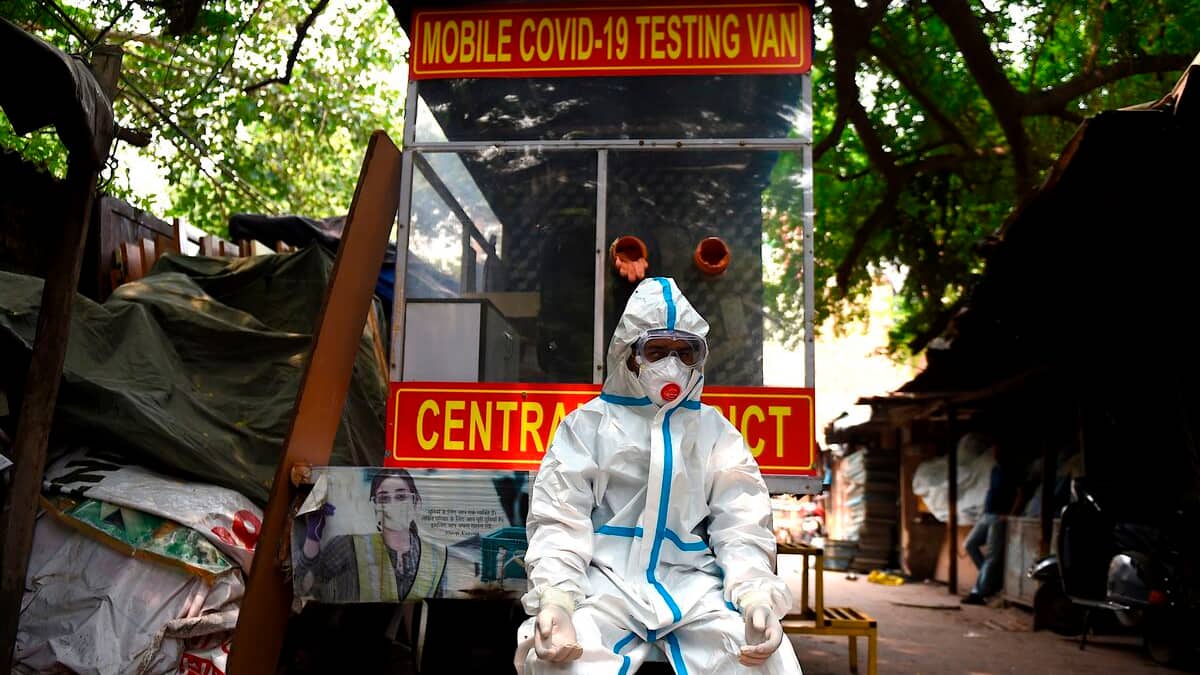