The health condition of former West Bengal chief minister Buddhadeb Bhattacharya, who was admitted to a hospital in south Kolkata, deteriorated to “very critical” on Wednesday evening, officials said.

Bhattacharya, 76, was put on mechanical ventilator support at the critical care unit of the private hospital, where he was taken to in the afternoon as his breathing-related problems aggravated, they said.

“Mr Bhattacharya’s RT-PCR test showed he was COVID- negative and that is positive news. The CT scan of his brain showed old lacunar infarcts. He is undergoing treatment at the CCU,” a senior official of the hospital said.

Repeated tests showed an accumulation of carbon dioxide and a lower pH level, following which doctors decided to electively ventilate him after proper consent of family members, he said.

“His condition is very critical,” the official added.

Bhattacharya’s pulse and blood pressure are stable and the veteran politician is on IV antibiotics, IV steroids and other supportive medications, said a statement released by the hospital.

His oxygen saturation deteriorated to 70 per cent in the morning and he became unconscious, following which he was rushed to the hospital.

The veteran CPI(M) leader was initially put on non- invasive ventilation (BIPAP) at the hospital after which his oxygen saturation improved to 95 per cent.

However, his condition deteriorated and he was put on mechanical ventilation.

A five-member team of senior doctors, including a cardiologist and a pulmonologist, was constituted to monitor his health condition.

Bhattacharya, who was the chief minister of West Bengal from 2000 to 2011, has been suffering from COPD (chronic obstructive pulmonary disease) and other old age- related ailments for quite some time. He has been away from public life for the past few years due to his health.

He had stepped down from the CPI(M)’s politburo and the central committee in 2015, and gave up membership of the state secretariat in 2018.

“We are beside his family. We respect him a lot. I thank all the doctors who are treating him, but we have to be ready for any situation. I can feel his daughter’s (Suchetana Bhattacharya) mental condition,” she said after visiting the hopital.

Banerjee also assured all kinds of support from the state government for Bhattacharya’s treatment.

Governor Jagdeep Dhankhar also visited the hospital and wished for his speedy recovery.

“Comrade Buddhadeb Bhattacharya has been admitted for treatment of acute exacerbation of his respiratory problems in Woodland. No visitor is being allowed now. Well-wishers are requested to co-operate with the hospital authority for maintaining strict discipline in this regard,” he tweeted. PTI

Sat Dec 19 , 2020
The Arkansas Board of Education has hit “refresh” on computer-science education for elementary and secondary schools by adopting a revised set of standards and courses for the coming 2021-22 school year and beyond. The latest revisions include a new emphasis on “storytelling” and on sequencing high school courses by sub-areas […] 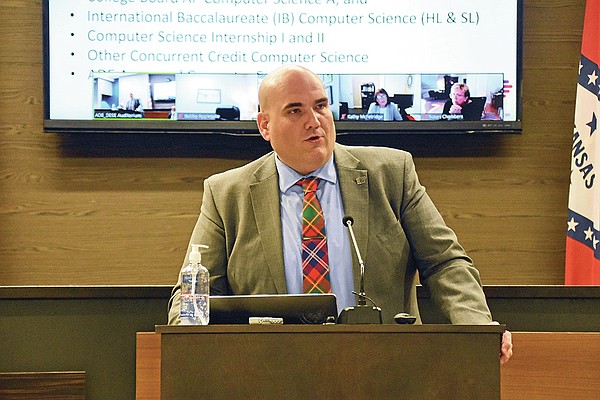