Whether in Quebec or elsewhere on the planet, the COVID-19 pandemic continues to disrupt our lives in several ways.

Here’s what you need to know about the pandemic as you go about your day.

22:50 | Back from Barbados, Pierre Arcand says he regrets his decision

Just back from his controversial trip to Barbados, Liberal MP Pierre Arcand has said he apologizes for his choice, but has no intention of resigning.

It was christened COVID-19 in February, but the virus had been spreading for weeks.

8:48 pm | Accused of hitting her children because they were not wearing their masks

An Arizona mother is facing multiple charges for hitting her children who were not wearing their masks.

Even if there is light at the end of the tunnel, the next few months will still be extremely difficult according to several experts.

19:20 | New Democrat relieved of responsibilities after trip to Greece

New Democrat MP Niki Ashton was dismissed from her post as spokesperson for several issues because she moved to Greece for family reasons despite government recommendations, the NDP announced on Friday evening.

Canada’s decision, forcing all travelers to test negative for COVID-19 in order to be able to return home, has not prevented Quebecers from flying south.

18:38 | Rises in COVID cases: “we are seeing the side effects of the December gatherings”

The situation in Quebec hospitals is becoming increasingly difficult due to the sharp rise in COVID-19 cases in recent days.

5:07 pm | When can businesses really reopen?

Could the health break that Quebec has granted itself to reduce COVID-19 contamination as much as possible last longer than expected and the reopening of non-essential businesses postponed?

A gathering of six people in a Gatineau residence gave rise to a police intervention which quickly escalated on the evening of December 31, when a man even had to be arrested.

One of those present filmed part of the scene and another posted the footage on social media.

Margrethe II, the very popular Queen of Denmark, received a first injection of the COVID-19 vaccine, the royal household announced on Friday.

Although the situation is taken seriously by the management of the establishment, the union fears that the situation will worsen and lead to a breakdown in service.

3:01 pm | A recalcitrant causes an outbreak in Listuguj

It is the turn of the indigenous community of Listuguj, in Gaspésie, to be struck by COVID-19: 11 cases are active in the community of just under 2,000 inhabitants and one person is currently hospitalized.

According to the band council, the appearance of the virus is linked to close contact with a person who went to the community from another region and who did not isolate himself upon arrival.

The Mi’gmaq government confirmed three new cases of coronavirus on December 30. Six new cases appeared on December 31 and two more were added to the balance sheet on this first day of 2021.

2:08 pm | In Copacabana, revelers scowl, but the beach breathes

Fewer parties, fewer garbage cans … The garbage collectors at the famous Brazilian beach of Copacabana, in Rio, had the pleasant surprise on Friday that they had 89% less garbage to collect than on New Year’s Eve in 2020, in the day after a New Year’s Eve 2021 upset by the coronavirus.

13:40 | Over 20 million infections identified in the United States

The United States started the year 2021 by crossing a grim new threshold on Friday with 20 million identified cases of COVID-19, the outbreak of the epidemic showing no sign of slowing down.

The world’s leading power deplores more than 346,400 deaths from the coronavirus, making it the most bereaved country in the world by the epidemic, in absolute value.

Several employees working in COVID-19 screening centers have been infected with the disease in the Quebec City region.

Large-scale screening operations will be set up in these centers which are still a little less crowded on this first day of 2021.

At the center of Colbert Park alone, at least 10 workers have tested positive for COVID-19.

However, public health refuses to talk about an outbreak there.

12.50pm | More than 20 million infections identified in the United States, according to Johns Hopkins University.

It’s hard to make a living when your job is to entertain an audience, but there is no one to watch the show. This is the reality of thousands of artists. With the pandemic, the cultural domain is severely shaken.

Margrethe II, the very popular Queen of Denmark, received a first injection of the COVID-19 vaccine, the royal household announced on Friday.

9:58 am | Health system under pressure: “it does not change”

The Quebec health system is entering the year 2021 under pressure as the province experienced a new peak of COVID-19 cases in 24 hours on Thursday.

8:34 am | BioNTech to increase vaccine production in Europe

The German company BioNTech explained on Friday that it plans to rapidly increase the production of its vaccine against COVID-19 in Europe, developed with its American partner Pfizer, in order to fill a “gap” in the absence of other approved vaccines.

The curfew will go from 8 p.m. to 6 p.m. in fifteen departments in the eastern part of France from Saturday as part of the fight against the COVID-19 epidemic, government spokesman Gabriel Attal announced on Friday.

A rave that began Thursday evening in the west of France still gathered, Friday morning, about 2,500 participants “from different departments (French) and from abroad”, we learned in a statement from the prefecture of the Ille-et-Vilaine department.

“A first”: undoubtedly largely thanks to the ban on alcohol, the huge hospital in Soweto did not receive any trauma emergency patients during the transition to the new year, in a country struggling to fight against it. the second wave of COVID-19.

5:45 am | Other politicians in hot water

After MPs Pierre Arcand and Youri Chassin in Quebec and Ontario Minister of Finance Rod Phillips, other politicians in Western Canada also found themselves in hot water after heading south.

5:27 am | Despite the pandemic, reforms will continue in Quebec

Even if he has set in motion 71% of his electoral promises, important commitments remain to be delivered, in addition to the files imposed by the news.

When returning to class in January, several students will hold their breath, dreading the first report of a school year quite out of the ordinary.

5:09 am | Kim thanks North Koreans for their support in these “difficult times”

Leader Kim Jong Un thanked the North Koreans for their support in these “difficult times” in a handwritten letter published Friday on the New Year’s Eve and a few days before a major ruling party congress intended to fix the economic goals of the country.

5:04 am | Illegal gathering in Quebec: one person arrested and 52 tickets issued

While the Quebec government had banned all gatherings for New Year’s Eve, this measure did not prevent some people from meeting in the Parliament Hill sector on Thursday evening, resulting in an arrest and the delivery of 52 tickets.

The COVID-19 pandemic has given rise to surreal scenes that could hardly have been imagined to take place in Quebec before the onset of the crisis.

Sat Jan 9 , 2021
On January 5, the Ho Chi Minh City Tourism Association held the Fifth Congress for the 2021-2025 term. Nguyên Thi Khanh was re-elected president of this association. >> HSBC: Vietnam has the highest growth rate in Asia >> Make cultural heritage an asset for national development A corner of Ho […] 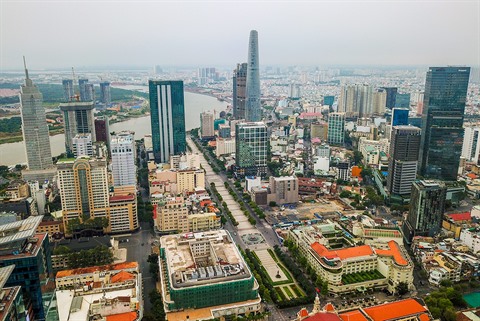