Sign up for The Brief, our daily newsletter that keeps readers up to speed on the most essential Texas news.

Republican lawmakers’ move to ban nearly all abortions in Texas was accomplished through a huge, unprecedented expansion of who can bring a lawsuit against someone else: Under the law, anyone can sue anyone who performs, aids or intends to aid in an abortion — regardless of whether they have a personal stake in the abortion performed.

“It’s wide open,” said David Coal​​e, an appellate lawyer in Texas. “That is a radical expansion of the concept of standing.”

The expansion has far-reaching legal implications, legal experts say, by challenging the very notion of what a court is for and emboldening civilians to enforce law, a duty traditionally left to the government. It’s also a reversal by Texas Republicans on tort law, in which they have typically sought to limit the ability to sue, not expand it.

Legal experts also told The Texas Tribune that the measure is part of an emerging trend in Republican-dominated governments that find it difficult to constitutionally prohibit cultural grievances. Instead, they empower civilians to sue for civil remedies.

Jon Michaels, a professor at UCLA Law, points to Tennessee, where students, teachers and employees of public schools can sue schools if they share a bathroom with a transgender person, as well as Florida, where student athletes can sue their school if it allows a transgender athlete to play.

“It’s a way of back-dooring and winking while constitutional violations are occurring,” Michaels said. “It is compromising democracy.”

Texas’ abortion law goes much further. Typically, in tort law, which is used to compensate people who have been injured, a person must have incurred some sort of personal harm in order to sue someone else. That’s the very nature of what a civil court is intended to remedy in such a case, several legal experts told the Tribune. Texas’ new abortion law, however, gives that privilege to anyone.

Abortion opponents, who support the new law, said that the question of standing, or provable harm in order to bring a lawsuit, is moot because the Legislature has granted it to everyone under SB 8.

“They have standing because the Legislature gives it to them,” said John Seago, legislative director for Texas Right to Life. “You don’t have to be personally harmed.”

Some, though, say the law cuts to the very nature of what a civil court is supposed to do: provide a remedy to a harmed party.

“There’s a sort of irreducible minimum that you have to have before you’re in court, just as a matter of how a court is defined,” Coale said. “And this goes way beyond that.”

Seago told multiple media outlets that the measure was designed to avoid federal questions of violating the constitutional right to an abortion, which has been recognized by federal courts since Roe v. Wade nearly 50 years ago, because “activist judges” at the district level block restrictions on abortion because they think the laws violate the Constitution.

‘No sense of consistency’

So far, the Texas law has been highly successful in achieving a long-stated goal of many conservatives: reducing the number of abortions. Planned Parenthood and Whole Woman’s Health, both of which operate multiple clinics in the state, both reported canceling all abortions that violate the new law — estimated to be about 85% of abortions in Texas.

But in one way, the new law is an about-face by Republicans in Texas who have long railed against the proliferation of lawsuits, usually seeking to increase the bar to bring a lawsuit, not lower it. For decades, groups including the powerful Texans For Lawsuit Reform have sought to reduce “needless lawsuits,” especially against businesses, by funding and helping to elect Texas Republicans. In the mid-1990s, George W. Bush included tort reform in his platform as he ran for Texas governor. In the most recent legislative session, lawmakers made it harder to sue commercial trucking companies and limited claims that can be brought against companies for exposing workers and others to COVID-19.

But in a statement, Lucy Nashed, communications director for Texans for Lawsuit Reform, said that the group did not oppose the abortion law. She said that the group often opposes bills that are likely to create new causes of action that are likely to encourage the plaintiff’s bar to engage in mass-tort-style litigation, such as after Hurricane Ike in 2008 with weather-related litigation.

“We do not believe SB 8 creates the circumstances that provide for a mass-tort profit center for the plaintiff’s bar,” Nashed wrote. “Mass tort models require a more pervasive universe of potential plaintiffs.”

Michaels, the UCLA professor, said that Republicans reversing course on tort law is inconsistent with the party’s ideology, and simply political — he said it stokes cultural wars and emboldens an increasing base of Republican voters who are energized by moral outrage.

“Republicans have always hated trial lawyers and plantiff’s bar, and they’ve always been against these types of suits,” Michaels said. “They were always talking about people suing McDonald’s or Starbucks, and how horrible it was. Now, they’re creating these things because it’s advantageous to do so.

“There’s no sense of consistency,” he said. “It’s a way of subsidizing a community or a base that is easily outraged and giving them money and legal opportunity to cause a lot of trouble.”

Adriana Piñon, a senior staff attorney and policy counsel for the ACLU of Texas, said the new law “stacks the deck” against defendants and encourages plaintiffs to sue by including various mechanisms in the law, such as barring a change in venue unless all parties agree, limiting the legal defenses that the defense can present and awarding the plaintiff $10,000 at minimum if they are successful in the suit.

“This leaves open the courtroom door in Texas,” she said.

Piñon and others worry about an avalanche of lawsuits that could be launched against abortion providers, doctors, nonprofits, volunteers or even private citizens who help a family member or friend in getting an abortion.

But Seago, of Texas Right to Life, disagrees that a wave of lawsuits is coming, simply because abortion clinics have already canceled appointments. Plus, he said, it’s “not a winning strategy” to flood a defendant with lawsuits, for risk that a judge might dismiss them as frivolous.

“None of this is relevant if they comply with the law, and that was the goal,” Seago said. “Some of the rhetoric around this bill acts as if the judiciary is not going to function. … I think we can have more faith in our judiciary than assuming they’re just going to be pawns of the pro-life movement.”

Still, even getting a lawsuit dismissed can be burdensome and, at times, require expensive lawyers. The abortion law specifically bans plaintiffs from being ordered to pay defendants’ legal fees; opponents fear that the risk of filing a baseless lawsuit is low for plaintiffs and that defending from many lawsuits — even if they are dismissed — could still be financially damaging to a clinic or doctor.

The closest legal precedent for the law’s “vigilante” enforcement, as some have called it, is found in environmental law. The Clean Air Act and Clean Water Act allow civilians to sue the federal government when it fails to enforce the law. But even so, courts have narrowed those definitions over time, and the statute is limited. For example, an environmental group might bring a lawsuit but has to prove that one of its members was directly affected by the environmental harm.

Traditionally and generally speaking, said David Noll, a professor of law at Rutgers Law School, our society doesn’t want random people making decisions about whether or not a law is enforced.

“You vest those decisions in a district attorney or an attorney general, who is subject to ethics laws and looking out for the public interest,” he said. “SB 8 inverts that by putting private litigants who are motivated by ideological considerations into the position of a government prosecutor.”

Noll said that the authors of the law cobbled together different precedents to make something new — a “Frankenstein monster” of sorts, he said.

Seago disagreed that SB 8 was a new concept. He pointed to Medicaid fraud, in which plaintiffs don’t have to prove that they personally lost money to bring a lawsuit of fraud. In those cases, Medicaid is a government-run program. He compared the civilian lawsuits to a whistleblowing mechanism to ensure the abortion law was followed.

Seago said his group wants cases in state courts instead of federal ones, where he said “activist” federal judges tend to rule in favor of a constitutional right to an abortion. “This is a different path for those legal battles to go into state courts,” he said.

The question of standing, or who is allowed to sue, will be taken up by those state courts as well, legal experts said. Coale said there are serious questions about whether the Texas constitution requires someone to have standing to bring a lawsuit or if indeed the Legislature’s protection will be enough to allow people to bring what lawyers call “generalized grievances” — harms that weren’t committed against them personally.

Disclosure: Planned Parenthood and Texans for Lawsuit Reform have been financial supporters of The Texas Tribune, a nonprofit, nonpartisan news organization that is funded in part by donations from members, foundations and corporate sponsors. Financial supporters play no role in the Tribune’s journalism. Find a complete list of them here.

Join us Sept. 20-25 at the 2021 Texas Tribune Festival. Tickets are on sale now for this multi-day celebration of big, bold ideas about politics, public policy and the day’s news, curated by The Texas Tribune’s award-winning journalists. Learn more.

Searching For Italy Is My New Favorite Food Show

Mon Sep 6 , 2021
It’s going to be an exceptionally tall order for anyone to replace Anthony Bourdain as the best travel show host of all time, but after this six-episode first season of “Searching for Italy,” Tucci is well on his way to earning a place on the Mount Rushmore of food/travel show hosts. […] 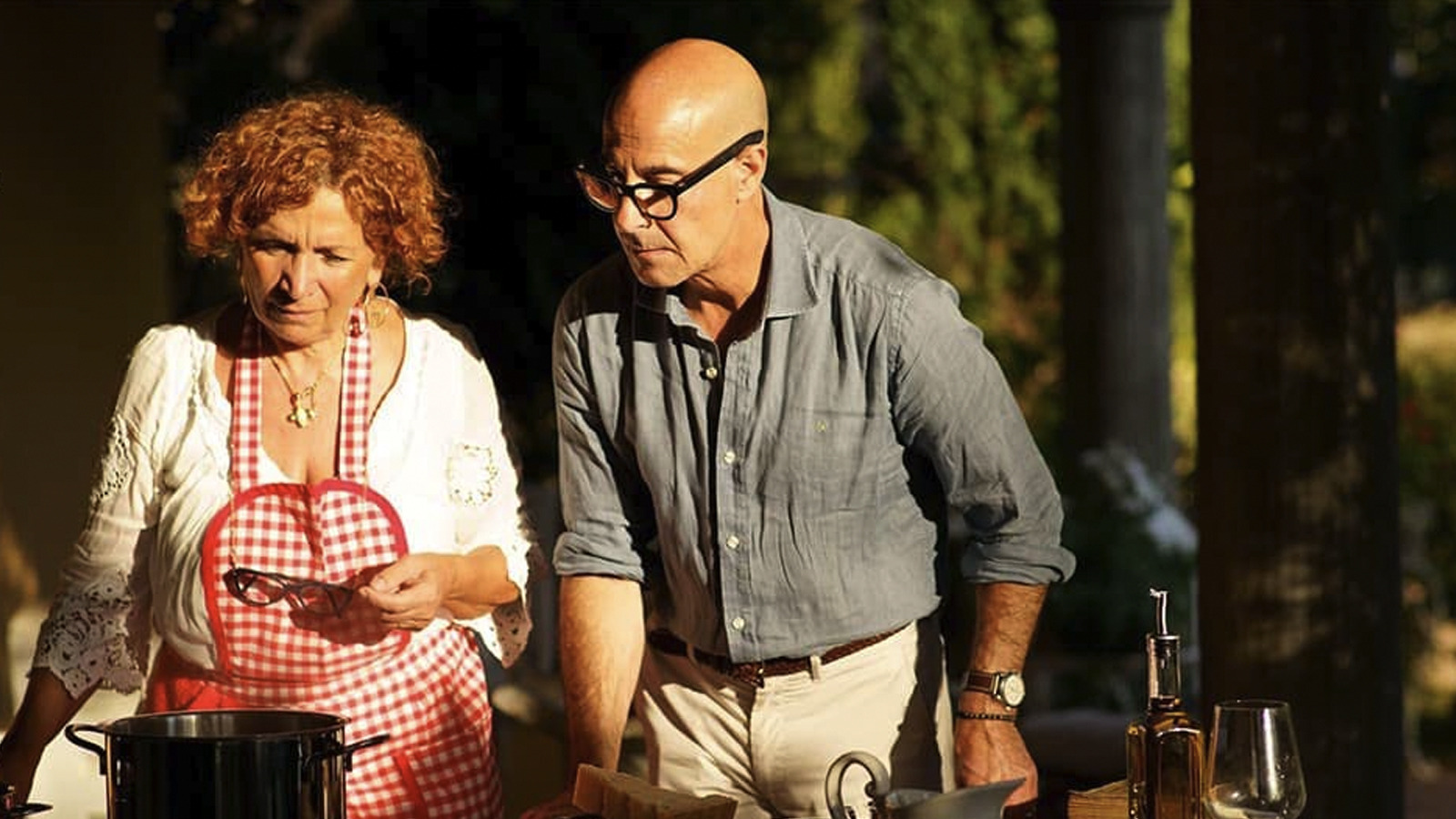