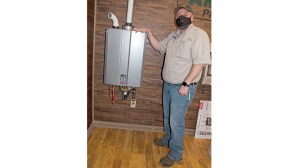 Nathan Davis, branch manager at the Hanging Rock office of Arrick’s Propane, demonstrated how a tankless propane hot water heater can be connected to wi-fi for remote access. (The Ironton Tribune | Heath Harrison)

HANGING ROCK — Arrick’s Propane is closing in on its 70th anniversary and the company has grown considerably from its humble beginnings.

“Ralph Arrick Sr. started it in 1952 with just his pick-up truck,” Nathan Davis, branch manger of the company’s Hanging Rock office, said. “He started by taking propane cylinders to the atomic plant in Piketon. It evolved and now it has seven offices and 100 employees.”

Davis’ office, which has 12 employees, serves most of Lawrence County, as well as Scioto, Gallia and Jackson counties.

Davis said the company has stayed in the family since its inception, with Ralph Arrick Jr. assuming ownership, while a third generation of the Arricks is actively involved now.

He said the company is the leading provider of propane for the Tri-State area, and also sells things such as tankless propane water heaters, propane appliances and direct vent heaters.

“We’ve also started doing firefighter training,” Davis said. We give them basic knowledge of propane and teach them what to expect when they first come on a scene.”

Davis also said they are promoting autogas, which is propane used to fuel vehicles.

“It saves tons of money and it’s a lot greener than traditional fuel,” he said, adding that this is very popular with companies that have vehicle fleets.

“Anybody who wants to save money, propane is the way to go,” Davis said.

The company had to meet a major challenge earlier this year, when three winter storms covered the county in snow and ice and knocked out power to thousands.

“We were extra busy,” Davis said. There was a rumor going around that our locations were running out of propane, but that was not true. We had a full supply and were able to get it to everyone in a timely manner.”

Davis said the biggest obstacle was not the supply, but getting trucks to locations as downed trees had blocked roads.

“We were leap frogging with the power crews,” he said. “We did not want to interfere with them, but we had an obligation to our customers.”

He said that as winter weather approaches, they recommend everyone to keep at least 30 percent in their tank to stay supplied as crews make their way to locations.

Davis said one of the biggest pushes for the company are tankless propane water heaters, one of which they have on display in their showroom.

He said rebates are also coming soon for those who make the switch to propane.

Davis said the heaters offer a 15-minute recovery on hot water, as opposed to a 30-45-minutes for a shower with a gas or electric water tank.

“As long as you have propane, you will have hot water,” he said.

For more information on the company, visit www.arrickspropane.com.

Fri Apr 2 , 2021
(Motorsport-Total.com/Motor1) – Our esteemed readers have probably already read the section “Do you still know him?“Studied. There we present cars from the past, which are now almost forgotten. But what about the models that still drive around in large numbers in traffic? Those types that everyone knows, who have been […]