Emanual Williams, Tony Sanchez and Mica Standing Soldier all looked for what they could do for the community during the Chauvin trial.

MINNEAPOLIS — One of the many things that Mica Standing Soldier, Tony Sanchez and Emanual Williams have in common is that they always knew, law would be their path.

“We had some people in my family who had gone through the legal system who didn’t really receive adequate legal representation just because they didn’t have enough money to shell out to have a big time lawyer,” Williams explained.

“I’ve had family in the criminal justice system, close family members who are felons,” Sanchez said. “I’ve seen, what wasn’t helpful. I’ve seen what people were sentenced and what should have been.”

That ‘could have’ or ‘should have’ is what brought the three University of Minnesota first year law students to the Legal Rights Center.

“A lot the clerkship is working on a community action plan, so a lot of that looks like trial education, legal education, restorative justice practices and resources,” Standing Soldier said. “So a lot of my work is basically being able to translate a lot of the legal jargon that’s used in court and make that accessible for the community. And give them a space where they can process that and talk about what that looks like.”

Standing Soldier added that although she couldn’t have predicted that she’d specifically be in Minneapolis years back, she said she knew she’d surround herself in work she’s immersed in now. When asked about Minneapolis currently being a ‘hub’ of tragedy, she replied that it’s always been that way for Black, Indigenous and People of Color.

“One of the really intense things about being a Black or Brown or Indigenous person is that that hub is often your reality regardless of where you are,” she said. “So I knew that would just be the world that I live in realistically.”

“We were out at multiple protests, in front of  the Government Center, we started to visit some of the protests at Brooklyn Center,” Williams added. “Just to provide that legal help to a lot of protesters and kind of bridge the gap.”

Breaking down the ‘legalese’ within the courtroom and making sure people know their rights when protesting is a part of what the three law students do as a part of their clerkship.

Williams said he knows the legal barrier is high, but many people outside of the law setting often do get the gist.

Despite the emotional difficulty and the re-traumatization that is involved in following the Derek Chauvin murder trial closely, the three all say the challenge makes them want to dive further into criminal defense.

“It’s important to process your emotions, to have some sort of connection or else you find yourself cold-hearted and turned away from everything that can possibly bring you down,” Sanchez said. “And then at that point you’re not really working for the people, you’re working on the case.”

“If you come from a world where tragedy isn’t really your reality, it’s hard to believe that’s the case,” Standing Soldier added. “Because no one wants to see how awful the world is, it’s really hard to deal with. So it’s important to be able to translate what that looks like into a way that’s digestible for people.”

The Legal Rights Center has been and continues to be a great resource for those who are wanting to understand the trial. You can find their Trial Community Support page here.

They also provide resources about ‘knowing your rights,’ when it comes to protest resources.

Tue Apr 20 , 2021
SHRUB OAK, N.Y. – Senior quarterback Tyler Santucci is in his third season playing varsity football for Lakeland. Santucci also plays defense in lacrosse for the Lakeland/Panas Rebels. He will be playing football next fall at Sacred Heart University. How old were you when you started playing football and what […] 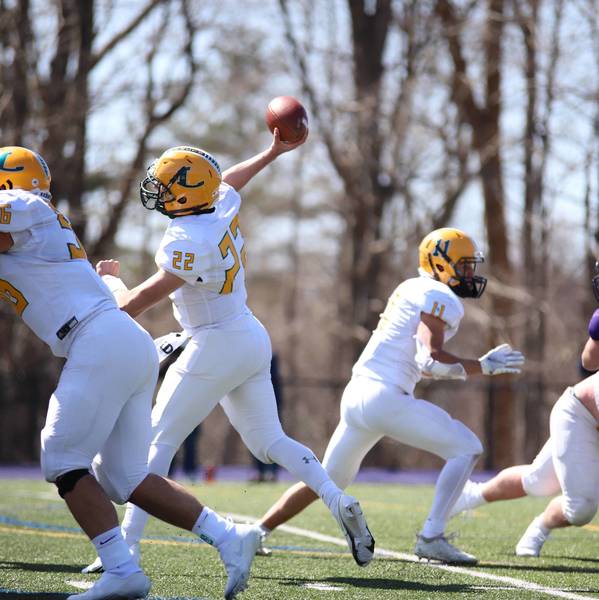