The Baroque style of architecture and art, which is often represented in southern Germany, also has unexpected examples in Recklinghausen. These can be found mainly in the old town.

The ironic style of the “Gelsenkirchen Baroque”, with which bulky and generally bulbous furniture from the period around 1930 or 1950 is referred to, provided with the longing for bourgeois living culture in a rather petty bourgeois milieu, is not meant when the Recklinghausen Baroque is reported. Nevertheless, it is probably astonishing to mention the Vest town and the term “Baroque” in the same breath. There are certainly enough examples of this art and architectural style in Recklinghausen. However, it is usually a matter of a revival, as it became fashionable in abundance towards the end of the 19th century as neo styles for other epochs as well.

But first it is worthwhile to briefly refer to the term “baroque”. After the art and architectural styles Romanesque and Gothic dominated in the High and Late Middle Ages, the Renaissance developed between 1520 and 1660 as the first modern style epoch. Then a new style emerged, which at first could not develop a concept of its own and was seen more as a continuation of the Renaissance. It was not until the end of the 19th century that the term “baroque” came up, which comes from the Portuguese word “barocco” and actually describes a crooked pearl. In Westphalia even the “Westphalian Baroque” emerged as a separate style epoch. However, compared to the splendid examples in southern Germany, its development shows a rather simple formal language.

In Recklinghausen, therefore, only a few Baroque objects were created, rather existing examples of art or architecture were equipped with baroque details or revised.

The oldest building ensemble in Recklinghausen with a multitude of different styles is the Church of St. Peter. It has both architectural and art-related baroque details. This includes the church tower with its unmistakable roof as the most conspicuous part of the object. Originally it had a slim, towering shape with a Gothic roof design. However, after being severely damaged by cannon fire towards the end of the Thirty Years War (around 1640) and a few years later by lightning, it partially collapsed in 1652. The necessary reconstruction was even supported by the electoral sovereign, so that a Dutch builder from Roermond was able to rebuild the tower ruins by 1669. The building was completed in the following year by the builders Heinrich Bauer and Heinrich von Coesfeld and has since shown itself with the Welschen roof hood, attached lantern and onion-shaped roof end.

Inside the Petruskirche, a very early representative of the baroque in Westphalia was built around 1617 with the new high altar, but it still had Renaissance echoes. The wooden altar structure consists of two parts: The high substructure contains the painting of a Descent from the Cross from the Rubens School in Antwerp between coiled decorative columns. It is a reproduction of a Rubens original from the Church of Our Lady in Antwerp. It reached Recklinghausen via Ruhrort. The second altarpiece of the handover of the keys to Peter, which is located in the upper altarpiece, was probably made towards the end of the 17th century.

In addition, St. Peter was equipped with other art objects during the Baroque period: the baptismal font from 1630 and the sculptures of Saints Peter, Paul, Joseph and John of Nepomuk. The series can be supplemented with various sacred objects.

A second baroque sacred building dates from 1666, the former monastery church of the Franciscan order and today’s grammar school church. After the Franciscan monks fled Dorsten during the Thirty Years’ War in 1632 and were allowed to settle in Recklinghausen with the permission of the Cologne Elector Ferdinand, they first built the church and ten years later the monastery buildings. Subsequently, several construction works were carried out on the church, for example after the fire in 1686. The church building had a single nave and four bays, so it had four vaulted sections. The initial interior design was, however, redesigned in a classical style in 1838 in line with contemporary tastes. The only reminder of the original baroque building can only be seen in the baroque tower with its two bells, which was built in 1716 as a so-called roof turret.

Altarpieces in the guest church date from the 17th century

On the third church building in the old town, the guest church, there are no structural witnesses to the Baroque era, but two altarpieces from this period, which in a smaller format resemble the high altar of St. Peter. The altarpiece, dated between 1650 and 1678, forms the framework for a relief on the passion of St. Sebastian. The second altar with an ornate baroque essay from the 17th century, on the other hand, contains a crucifixion group made of Baumberger sandstone from around 1400.

The crucifixion group, which is located directly in front of the Lohtor, should not be missing in this consideration. It dates from 1720 and was donated by the Schaumburgs.

In addition, there are a number of baroque town houses in Recklinghausen with more or less striking style elements.

The Castel Sant’Angelo is the oldest building still in existence from this period, which is also an example of the form of absolutism. The client, Clamor Constantin Münch, was the electoral judge and was the highest representative of the sovereign who resided in Bonn. Today’s hotel ensemble was not created as a three-wing complex right from the start. First, the mansion was built with an east tower and the single-storey east wing. The two-storey west wing with the coach house was built between 1713 and 1715. It was not until the 19th century that the ensemble, known since 1822 under the inexplicable name “Castel Sant’Angelo”, was given the character of a three-wing complex through the structural connection of the outbuildings with the manor house.

The baroque character can be seen on and in the manor house. The two-storey building with its eleven window axes and the accentuated middle section is striking. The arched entrance door is framed by pilasters and marked with an elliptical window (ox-eye) above a sprinkling gable. An inscription on the portal indicates that it was built in 1701. The center of the building is reinforced by a curved baroque gable equipped with a dormer, a so-called volute gable. Inside the house has a baroque garden room with a richly ornamented stucco ceiling and a splendid fireplace. Today’s hotel garden along the former city wall was originally laid out as a baroque garden.

Wulff’s house impresses with its mansard roof with ox-eye

The so-called “Mayor’s House” or “Franz Bracht House” was built in Caspersgässchen 6 around 1736, but due to its simplicity it does not allow any particular stylistic considerations. In the neighborhood, at Heilige-Geist-Straße 2, a late-baroque town house was built in 1780, which is typical in appearance. The electoral official Joseph Anton Rive and his wife Maria Sybilla had bought the property and house from the property of the Horst and Wilbring families in 1775 and had the current building erected after the building was demolished.

The house facing the street, known today as Wulff’s house, has five axes on the entrance side and window reveals set with sandstone. The center of the facade is characterized by a sandstone-framed door opening with a segment closure and horizontal roofing, which is no longer really visible due to today’s glass porch. The central segment gable in the mansard roof is highlighted by an oval window (ox eye).

The “Alte Apotheke” in Breite Straße, a late baroque building from the second half of the 18th century, is of a similar type. However, here a round-arched portal with an inward-facing baroque door and a triangular gable in the mansard roof mark the center of the front of the five-axis eaves house. At its core, the “old pharmacy” is a half-timbered house with baroque fronts facing east and south. A pharmacy belonging to the Strunk family had been housed in this building since 1832, but it was given up in early 2021.

Welsche hood – “Welsch” means Italian or foreign and in this case describes the roof construction, also known as the onion shape, which emerged during the Renaissance.

Rubens, Peter Paul (1577-1640) – the well-known baroque painter, born in Siegen, worked in Antwerp until his death and maintained a large studio with an “artist school” here.

classicism – denotes an art-historical epoch between around 1770 and 1840. Classicism replaced the Baroque or Rococo.

pilaster – (from Latin pila for pillar) is a pillar-like form element in architecture.

Ox eye – a window shape known since antiquity, which was also adopted by the Romanesque and Gothic. It was particularly widespread in the Baroque period.

Volute gable – a gable shape with volutes on the sides. The term “volute” (Latin for rolled), which is used in architecture, comes from French and means a snail shape or spiral in artistic ornamentation.

Mansard roof – This roof shape, the so-called “broken roof”, was very common in France in the 18th century. This made it easier to create rooms with vertical walls in the roof area. The name goes back to the French builders and architects François Mansart (1598-1666) and his great-nephew Jules Hardouin-Mansart (1646-1708) who made this construction popular in Paris.

Thu Jul 15 , 2021
TOLEDO, Ohio (WTVG) – If you need an extra hand around the house, there are a number of apps you can download, but only one that connects you to a local off-duty firefighter in the community, open and willing to lend a hand. Customers go to the website www.hidrent.com to […] 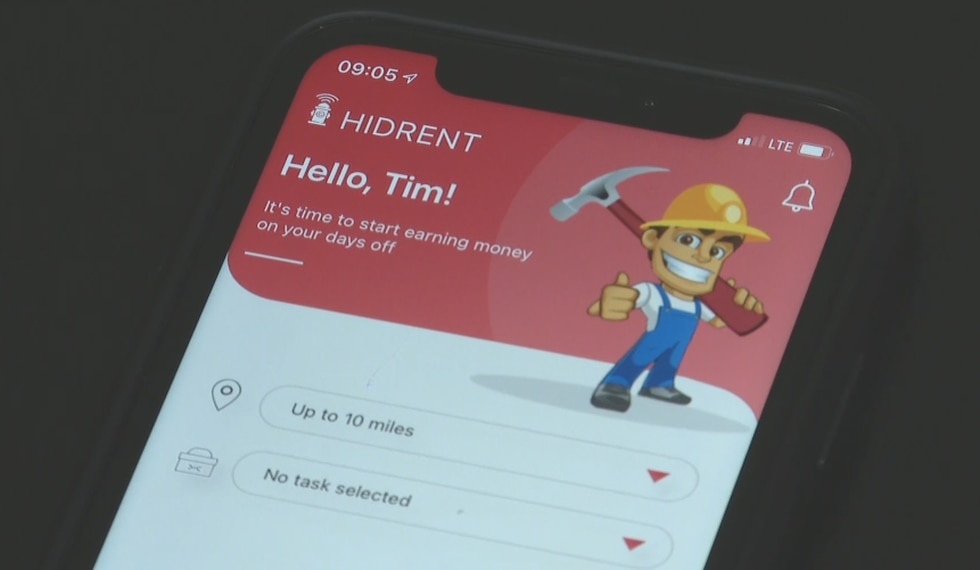