In times when traditional savings efforts are no longer generating income and borrowing costs practically nothing, the prices of real estate, bonds, stocks and shares are not only rising gold, but of course also from alternative forms of investment and luxurious material assets with collector’s value. Investors are no longer interested in ordinary gold coins, stamps, paintings or art collections, but increasingly also in rare whiskeys, wristwatches, teddy bears, musical instruments and women’s handbags.

However, compared to traditional forms of investment such as stocks and bonds, these real assets have certain peculiarities. In contrast to a stock exchange, there is no fixed marketplace for trading rare luxury items. Correspondingly, such real assets are highly volatile and very difficult to liquidate. Furthermore, the collector’s value of various pieces cannot be measured using conventional valuation methods. As a rule, it is true that the rarity, the quality and the age or the vintage are among the most important price factors, but very different circumstances and criteria often play an elementary role.

In the past few decades, the market for classic wristwatches has increasingly become the focus of wealthy investors. Accordingly, some models are already considered a solid investment. The value of the watch does not always necessarily depend on its material content, its technical quality or its complications, but is determined by the temporary demand. Here it comes, as with the classic Art market, often to extreme price exaggerations. The post-impressionist Vincent van Gogh already recognized: “I keep reproaching myself for the fact that my painting is not worth what it costs”.

A breathtaking increase in value could thus be achieved with a Rolex Daytona reference 6239, for example. While the watch was worth around $ 1,000 in the 1970s, it changed hands in 2017 for $ 17.75 million. The reason for this price explosion was the successful Hollywood star Paul Newman, who wore the watch, with a 37 millimeter diameter, silver dial and manual winding, in the film “Indianapolis – Risk of Life and Death”.

The Paul Newman Rolex is currently the most expensive auctioned wristwatch in the world and even replaced the rare vintage watch Patek Philippe reference 1518 made of stainless steel, which was auctioned for over 11 million US dollars in 2016. With a list price of 2,265 francs, this model was still a long way from reaching an eight-digit price in 1944.

It is almost impossible to achieve such prices with your personal watch investment, but the value of some brands and models should continue to develop very positively. Investors who want to buy a watch as an investment should definitely rely on a well-known manufacturer such as Rolex, Patek Philippe or Audemars Piguet, which for example only come on the market in limited editions.

A study by the real estate consultancy Knight Frank, which regularly compares a wide variety of luxury collector’s items with one another, came to the conclusion last year that there is currently the greatest hype on the international market for single malt whiskeys. A bottle from the traditional Scottish distillery Macallan brought it to around 1.4 million euros at a Christie’s auction. Just a short one of this noble drop would be more expensive than an average family vacation with a proud price of approx. 3,700 euros.

The hype about rare whiskeys is unbroken

“The staggering rise in the price of rare single-malt whiskeys shows that the need for new, alternative asset classes is still high among wealthy investors,” said Andrew Shirley, one of the authors of the study by Knight Frank. The main reason for the high prices is currently the high demand for collectors from Asia. “The number of high-end bottlings in the high-priced segment in particular has increased significantly and increased prices have not led to a noticeable decline in demand,” said whiskey expert Marco Jansen in his quarterly report for whiskey collectors.

Decisive for the price development of a bottle of Singe-Malt are among other things the brand of the manufacturer, the maturation time in the barrel and the edition. Bottles from distilleries that have long been closed are among the real treasures. Whiskey lovers who now want to invest in this segment should definitely go to an auction or a reputable dealer instead of the alcohol cupboard in the supermarket. Since rare whiskeys, in contrast to watches, have the advantage that they are drunk every now and then, their rarity sometimes even grows on its own.

According to the authors of the study by Knight Frank, the ever-higher records on the market for rare spirits have now even exceeded the price development of many classic cars. Nevertheless, the old vehicles are still very popular. The greatest increases in value are achieved by unique film props, such as a Aston Martin from James Bond, or the former vehicles of celebrities.

Investors who speculate on capital growth by investing in a vintage car instead of driving pleasure should primarily focus on sports models and limited editions or unique equipment. In Germany, historical brands from Porsche, Mercedes and Ferrari are among the most popular models.

No ongoing income, but ongoing costs

In contrast to a bottle of whiskey, maintaining a classic car is very expensive and time-consuming. In addition to insurance, regular maintenance and a reasonable garage, there can also be high costs for original parts. Furthermore, even with the old vehicles, it is difficult to predict which model may be in demand in the future. As a consequence, as a layperson, you should always consult an expert or automotive expert.

String instruments – music to the ears of investors

The very special real assets with an investment character also include historical and handcrafted musical instruments. The products of the Italian violin makers Giuseppe Guarneri and Antonio Stradivari are at the center of the passion for collecting. It is not uncommon for lovers to spend several million euros on such string instruments, but they are not a sure-fire success.

In 2014, the auction house Sotheby’s wanted to sell one of the rare Stradivari models for around 45 million US dollars, but could not find a buyer. Since the special string instrument belonged to the violinist Peter Schidlof, who died in 1987 and who paid around 81,000 US dollars for the model in 1964, the auction house’s reviewers saw the high price as entirely justified. For example, the Stradivarius violin with the name “Lady Blue” from 1721 reached a purchase price of over 12 million euros. In the case of historical instruments, however, not only the manufacturer plays an outstanding role, but also of course the sound quality and who has played on or with the instrument.

Teddy bears with buttons in their ears are no longer just a toy in a child’s room, but have long been the stars of the auction house. In 2002 a collector bought the Steiff teddy bear with the name “Happy” from 1926 for around 156,000 euros. Such high auction results are not uncommon, so a similar bear from 1912 changed the showcase for almost 150,000 euros. Of course, not every old Steiff bear can make such sums, but well-preserved pieces from the 1930s and 1950s often cost between 25,000 and 30,000 euros. High prices can also be achieved with special models from the time before 1970. Even the value of bears from the 1990s has increased tenfold to date. As with all collector’s items, in addition to the rarity and age of the plush toy, the condition and quality of course also count.

While the men’s world is more interested in watches, women place more value on handbags. The value developments of some women’s handbags are in no way inferior to men’s watches. The coveted Himalayan model of the Birkin Bag, for example, changed the wardrobe at an auction for a record price of 338,000 euros. This makes this exclusive women’s handbag, which has been produced by the French luxury brand Hermés since 1984, the most expensive handbag in the world. With an annual edition of two copies and one copy in matt white crocodile leather, as well as an 18-carat gold buckle and over 200 diamonds on the handle, the Himalaya Birkin Bag is also something like the Bugatti Chiron among handbags.

Investors who may speculate on an increase in value do not necessarily have to take a six-figure sum in hand. Because of the very limited number of items, the prices of the common series models of the Birkin Bag, which are available on the secondary market from 8,000 euros, are also increasing. Although the Birkin Bag from Hermés is best suited for an investment in the handbag sector, rare models from Gucci and Prada occasionally achieve five-digit auction results. In contrast to stocks, undervalued handbags or bags with potential are very difficult to identify.

An asset class for absolute professionals

The diverse examples show impressively that stocks are not always the best capital investment. In contrast to the collector, art dealer or rarity dealer, the stock buyer does not need a lot of prior knowledge or extensive expertise or considerable start-up capital. This fact makes investing in stocks much more lucrative than the daring purchase of supposed collector’s items.

“If you want to make a profit, you really have to be very knowledgeable. Simply buying something rare and then waiting for the value to rise does not work,” the publicly sworn art expert Frithjof Hampel told WirtschaftsWoche. As a result, it is very difficult to predict the performance of various collectibles. “When zeitgeist and taste change, an entire market can change dramatically,” the art professional continues. Investors who want to invest their money in lucrative material goods should not only bring the necessary change, but also plenty of time and leisure.

Sun Jan 3 , 2021
In these coronavirus times, small valley businesses are looking for new, creative ways to reach more customers. In Palm Desert, a new initiative is being launched to encourage shopping local – it’s called the #StepUpToTheTablePalmDesert challenge. It’s the city’s latest shot at driving sales during the state’s stay-at-home orders. The […] 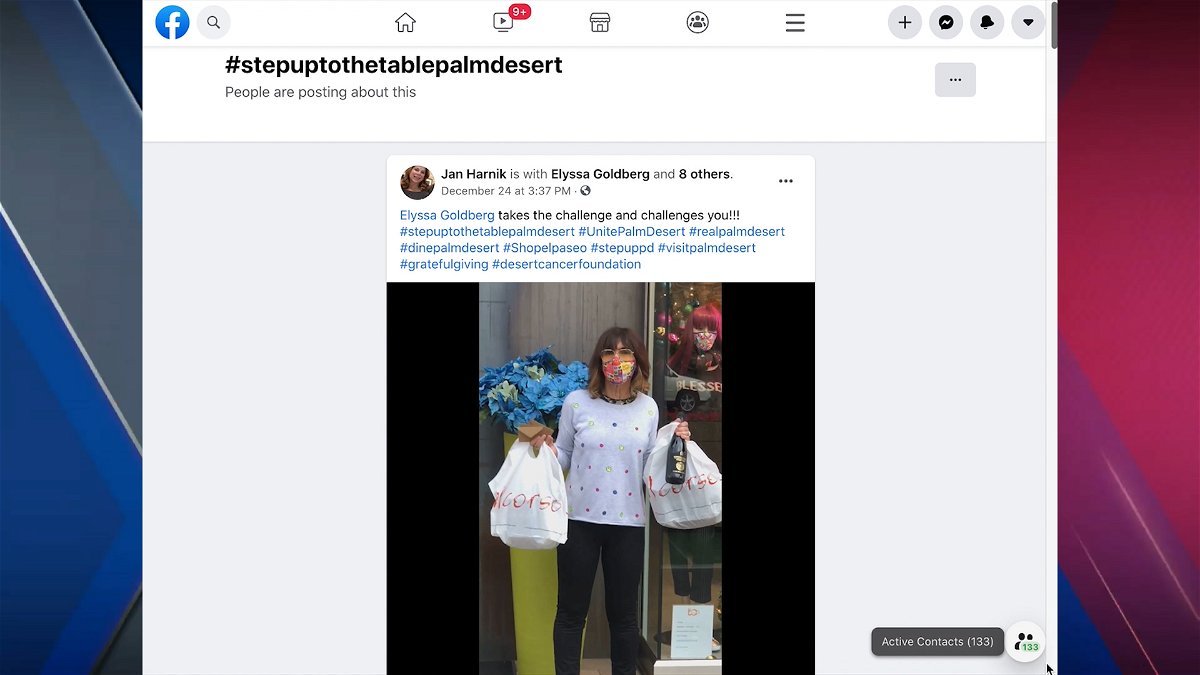