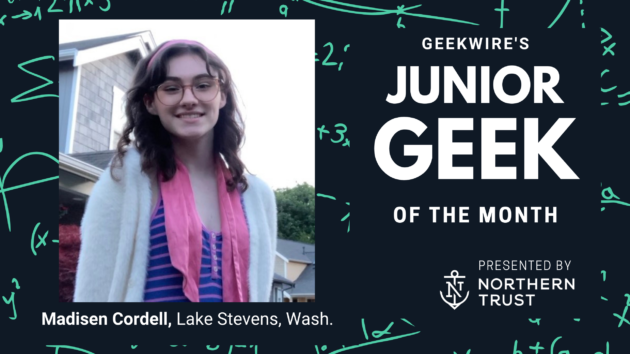 When Madisen Cordell was in elementary school, a teacher used to bring her into the hallway to give her more challenging math problems. Now a high school senior, Cordell is still being called out by teachers, this time to learn during a class that she had been selected to receive an Amazon Future Engineer scholarship.

For Cordell, the honor is recognition of her success at Lake Stevens High School in Lake Stevens, Wash., and it’s a huge help as she heads off to college this fall. Of the 100 recipients from underserved and underrepresented communities to be selected by Amazon, Cordell is the lone Washington state winner.

And it’s why she’s GeekWire’s Junior Geek of the Month for May. The monthly honor, presented by Northern Trust, recognizes talented young scholars, innovators, creators and entrepreneurs in the Pacific Northwest.

“I’ve always been really into science and math, those have always been my favorites,” Cordell said. “I hadn’t really gotten into computer engineering specifically until this year.”

She’ll have the chance to get much more into it as she pursues a degree in computer science and math at Western Washington University. Amazon awarded $4 million in scholarships in what is now the third year of the program. Students receive $10,000 a year for a total of up to $40,0000 as well as the chance for a paid software engineering internship at Amazon the summer after their freshman year.

Last summer, Cordell was looking for things she could learn online for free and decided coding would probably be a good thing to practice.

“I just really love it. I think it’s really fun,” she said, adding that it propelled her to email her school counselor and switch into AP computer science for the next school year. “I just had even more fun in that class.”

Her computer science teacher later shared a link for the Amazon scholarship application and Cordell filled it out that night.

“I really didn’t think about it again until it turns out I won it. It was pretty crazy,” she said.

Cordell isn’t sure what career path she’ll pursue. She wants to have an open mind and find something that she’s passionate about in college. She likes computer science because she’s presented with a problem and there’s a path to follow to solve it.

“I just like how there is a solution,” she said. “There’s the steps that you work through and there’s the language that you learn and there’s tools you can get to make an even better solution and just solve problems in a real way. But you also get the chance to be creative in how you do that.”

Cordell is involved in her school’s key club and says they do a lot of community service. She likes to help people. She’s also into arts and crafts, is an avid reader and member of her school’s book club, and did a previous internship through Goodwill’s Youth Aerospace Program.

She’ll work this summer at Padded Spaces, a Lake Stevens business run by her grandmother that makes stands for computer tablets — and which can be found on Amazon. She’d been saving to go to college but is grateful that she doesn’t have to worry about it now. She has a single mom and three younger sisters.

“I think it’s crazy that such a big company even knows who I am. That’s really bizarre to me to think about.” Cordell said of Amazon. “I do kind of wish that I didn’t have to take money from such a big company and that education wasn’t something you had to ‘beg’ for. I just wish that more people could have opportunities like this.”

GeekWire will feature a new Junior Geek of the Month in profiles meant to capture how they are looking to make a positive impact on the world through their geeky pursuits. In addition, they’ll receive special recognition from our project partner, Northern Trust.

Do you know an exceptional Junior Geek between the ages of 12 to 20 who is going to change the world? Submit a nomination.

Nominees must be residents of the Pacific Northwest, and parental information must be included for those nominees under the age of 18. Jr. Geeks may nominate themselves but please be sure to include your parent or guardian’s contact information.

Read about our previous Junior Geek of the Month winners.