Even if the pace of initial vaccinations against the coronavirus is currently slowing down: 75 percent of all adolescents and adults in Germany could be vaccinated at least once by mid-July – according to the latest calculations by experts. The prerequisite for this, however, is that the vaccines are delivered as planned and that around a quarter of adults also accept a vector vaccine such as AstraZeneca or Johnson & Johnson.

So far, four vaccines against the coronavirus SARS-CoV-2 have been approved in the EU and Germany: the two mRNA vaccines from BioNTech / Pfizer and Moderna, as well as the vector vaccines from AstraZeneca and Johnson & Johnson, which are based on an adenovirus as a carrier. After a rather sluggish start to the vaccination campaign, an average of 650,000 vaccine doses per day are now being administered in Germany. 35.7 million people have received at least one dose of vaccine, 14.6 million are fully immunized.

What can be done by when?

Now that the prioritization for the vaccination sequence will fall on June 7th and children from the age of twelve will soon be able to be vaccinated with BioNTech / Pfizer, the question arises as to how quickly the rest of those who want to be vaccinated can be cared for. Sebastian Dullien and Andrew Watt from the Institute for Macroeconomics and Business Cycle Research (IMK) of the Hans Böckler Foundation are now providing new forecasts. On the basis of current vaccination statistics, they have calculated a “vaccination path” that shows how many people could be vaccinated by when.

The result: After a foreseeable slowdown at the beginning of June due to the upcoming second vaccinations, the vaccination rate could pick up speed again towards the end of the month. By the beginning of July, 75 percent of adults could be vaccinated against Covid-19 at least once – that corresponds to around 52.1 million people. In the second half of July, three quarters of young people aged twelve and over could have received their first vaccination.

By the beginning of September, i.e. at the beginning of the next school year in many federal states, a total of 75 percent of the population over the age of twelve could be fully vaccinated.

How Much Vaccine Comes?

The prerequisite for this, however, is that all vaccine deliveries promised for June arrive. On average, 2.5 million vaccine doses per week are planned and approved. Of these, between 1.3 and 1.7 million doses per week are accounted for by the mRNA vaccine from BioNTech / Pfizer, around 500,000 by Moderna and between 200,000 and a good 500,000 by the vector vaccine from AstraZeneca.

It all comes down to the vector vaccines

Nevertheless, Dullien and Watt think it is quite realistic that three quarters of adults will be vaccinated at least once by the beginning of July. However, this is only feasible if the population also accepts the vector vaccines from AstraZeneca and Johnson & Johnson. According to the calculations, around a quarter of adults who have not yet been vaccinated but who want to be vaccinated should be ready to be vaccinated with these vaccines – including many people under the age of 60.

So far, however, the AstraZeneca vaccine has mainly made negative headlines. First there were inconsistencies in dosage and efficacy in the approval studies, then a disproportionately large number of those vaccinated with AstraZeneca developed a rare cerebral vein thrombosis – a side effect possibly triggered by an autoimmune reaction. Recently it was found that the vaccine contains contamination from viral and human proteins from the seed cultures.

The vector vaccine from Johnson & Johnson has a special position: Although only 10.1 million doses have been promised by the end of June. But because you only need one dose for complete immunization, this vaccine could play an important role in rapid vaccination progress: “The speed of the German vaccination campaign depends on the vaccine from Johnson & Johnson,” said Dullien and Watt.

The problem, however, is that the manufacturer has not yet met its delivery obligations, so it is completely unclear whether the announced quantity will actually arrive. Should the deliveries fail, this would double the vaccination progress. Because any vaccination not possible with Johnson & Johnson would have to be replaced by two doses of another vaccine. A complete failure of the J&J vaccinations from the beginning of June would therefore mean that an additional 50,000 vaccinations with other vaccines would be necessary daily until the end of July.

Thu Jun 3 , 2021
Wood screws from the old deck. Who has the last laugh now, suckers? Photo: Mitch Teich May 29, 2021 — With great fanfare, the UPS truck delivered the sawhorse brackets this week.  This was a surprise to me, as I was not expecting any sawhorse brackets, but as I got […] 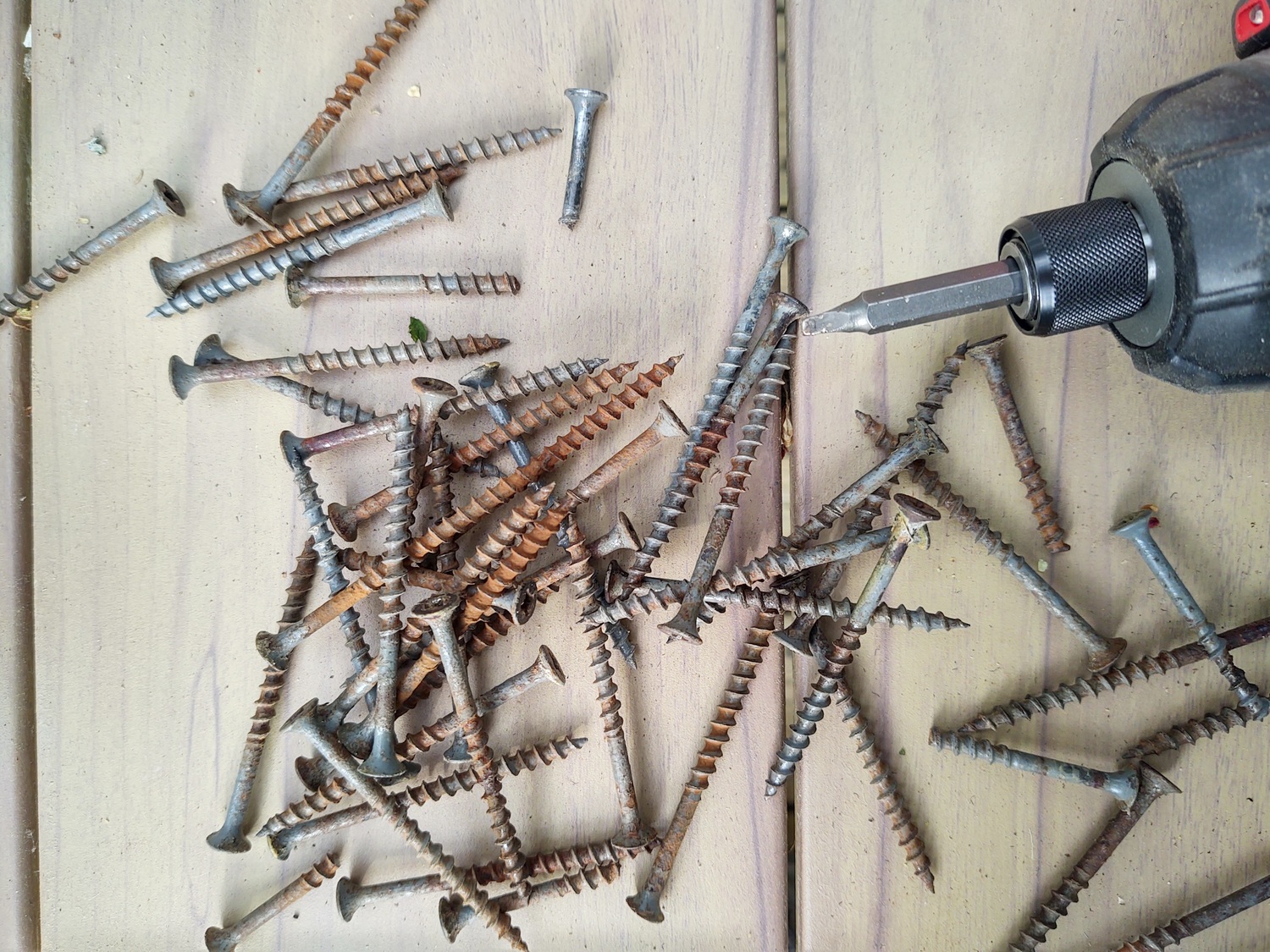